they looked on while it happened

A PROJECT WITH, APRIL GERTLER AND BARAK REISER 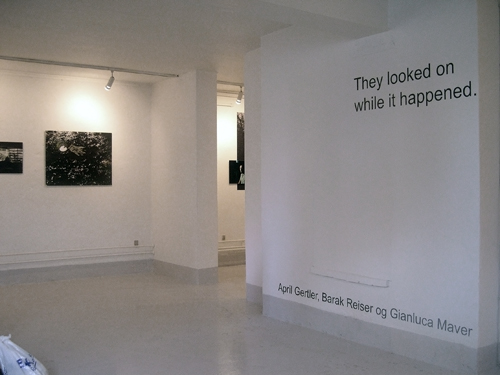 they looked on while it happened, Galerie Image, Arhus Denmark 2007 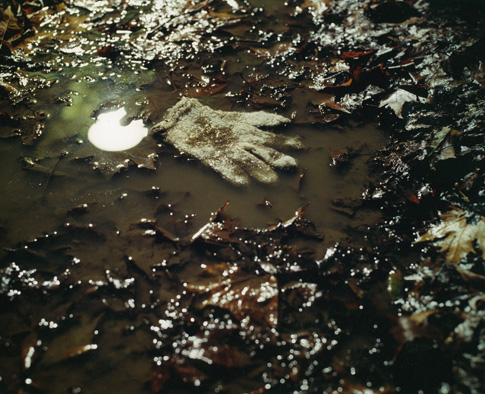 At night everything is the same yet nothing seems to be the same.

Somehow the hours of darkness have transformed reality into spaces of enigma and it is in this subtle interplay that the artists April Gertler, Barak Reiser and Gianluca Maver find their sources of inspiration for the photographic series They looked on while it happened.

At first the scenery appears as brief accidental moments recognisable from our visual register.

From a quiet night café in a deserted street to a voyeuristic gaze towards the massive body of an anonymous apartment building, somewhere in this reign of late night desolation a car is passing by and little by little a narrative is being revealed.

Beneath the surface of the images the air, smell and sound of a city night seems to be alive and the feeling of held back suspense is traceable throughout the construction of each image, but there is no given beginning or resolving climax in this series of strangely alluring objects and spaces. As if an insisting dream the narration only exists within the mind of the beholder on the premises of our own powers of imagination as the darkness unleashes our fantasy.

The sizes and positioning of each image in the series create installations that conceptually reflect the way reality is perceived. The empty gaps as well as the close positioning of images reveal that reality is not perceived in strict order but in random fragments, that seeks to create an advanced unified whole, a subjective narrative.

April Gertler (USA), Barak Reiser (Israel/Germany) and Gianluca Maver (Italy) each have their independent conceptual perspectives towards capturing the night as well, as applying different shooting techniques and camera types. The use of a flash and long exposure times are indicative of their pursuit of the atmosphere, colors and light of the city. What unites them overall as artists is their shared interest in the night theme and in creating vignettes of stories with reference to cinematic effects such as film-noire stills and the creation of suspense as the narratives seem to exist somewhere on the border between fiction and reality.

Through an ongoing dialogue and collaboration the artists seek, in each shared exhibition project, to integrate their individual images into a new cohesive body of works. An intense process where the artists choose and edit each other’s independent archive of images characterizes their working method. The individual works are selected by the other two artists and through this method new eyes and lives are given to each image in a collaboration that depends on tolerance. In this manner, the image and not the identity of each artist, appears relevant as the installation is seen as a united body of work owned by the group.

They looked on while it happened. marks the artists’ first collaborative exhibition in Denmark since the artistic collaboration started in 2004.

Art historian and Chairman of the Board of Directors, Galleri Image